Are you a smartwatch geek?  Finding the best-rated and trendiest fashionable smartwatches can be tedious and time-consuming.

It can be quite disappointing to search for numerous brands of smartwatches, only to find some that don’t meet your personal needs or standards.  It would be, for lack of a better word, a waste of time and money to attempt to wear and try them all.

The truth is that only a few smartwatches can be called “smart”, technically speaking.

This is pretty obvious since the technology in the smartwatch tech or “wearable computer” is still in the early stages of momentum.  Manufacturers are still in the process of developing powerful smartwatches that are really smarter than ever.

Still, the design, appearance, applications, and functionality of such devices has remarkably improved for the past few years since the debut of the first “digital watch” in the 1970s.

Today, the appeal of having a smartwatch on your wrist is now a gesture of pride and fashion, a fad that most people will want to show off and brandish.

Compared to traditional analog or mechanical watches, the ability and dominance of a smartwatch are top-notch such as interaction through its touchscreen interface, different options of watch screen faces, media player functions, GPS receiver, and even built-in sensors.

More so, you can pair and link them with your smartphone to receive notifications directly to your smartwatch.  You can even make some calls.

Most also have extra features that can monitor your heart rate and are able to track your sports and fitness activity.

If you find that these reasons are compelling enough for you to get one, then let’s look at the top five we have on this list. 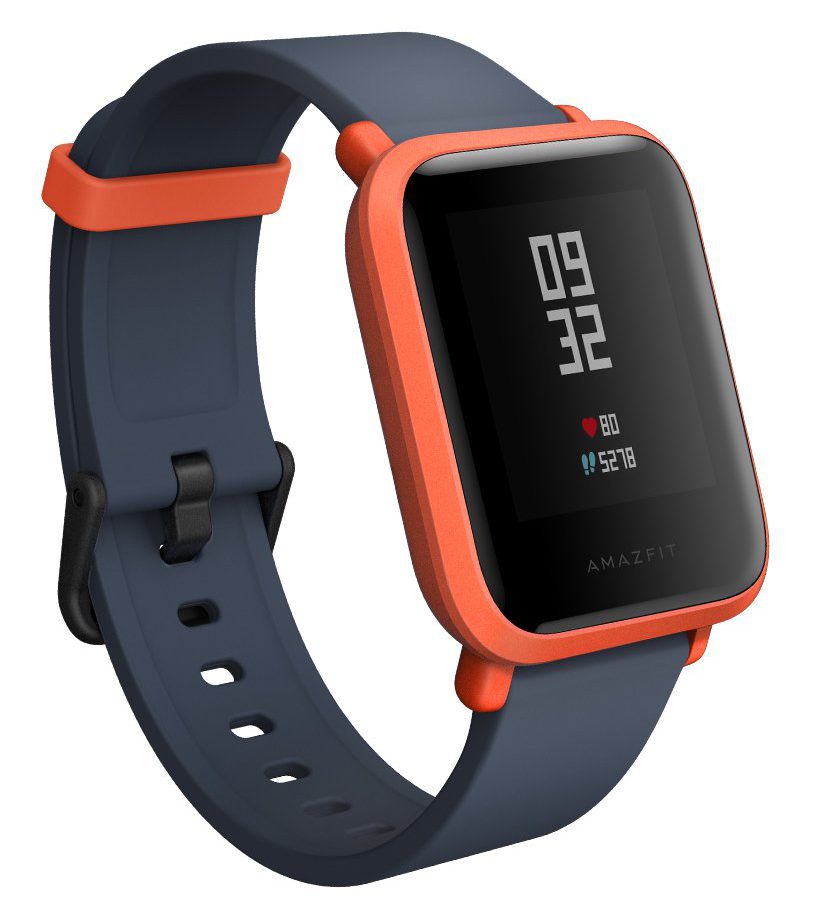 The Amazfit Bip has the basic functionality you can expect from an entry-level smartwatch.

The optical heart rate sensor and the built-in GPS are features that you don’t want to miss in a smartwatch.  It allows you to track in real time your physical activity and can likewise sense your steps taken, the distance you traveled, the number of calories you burned, and the quality of sleep you made on a daily basis. 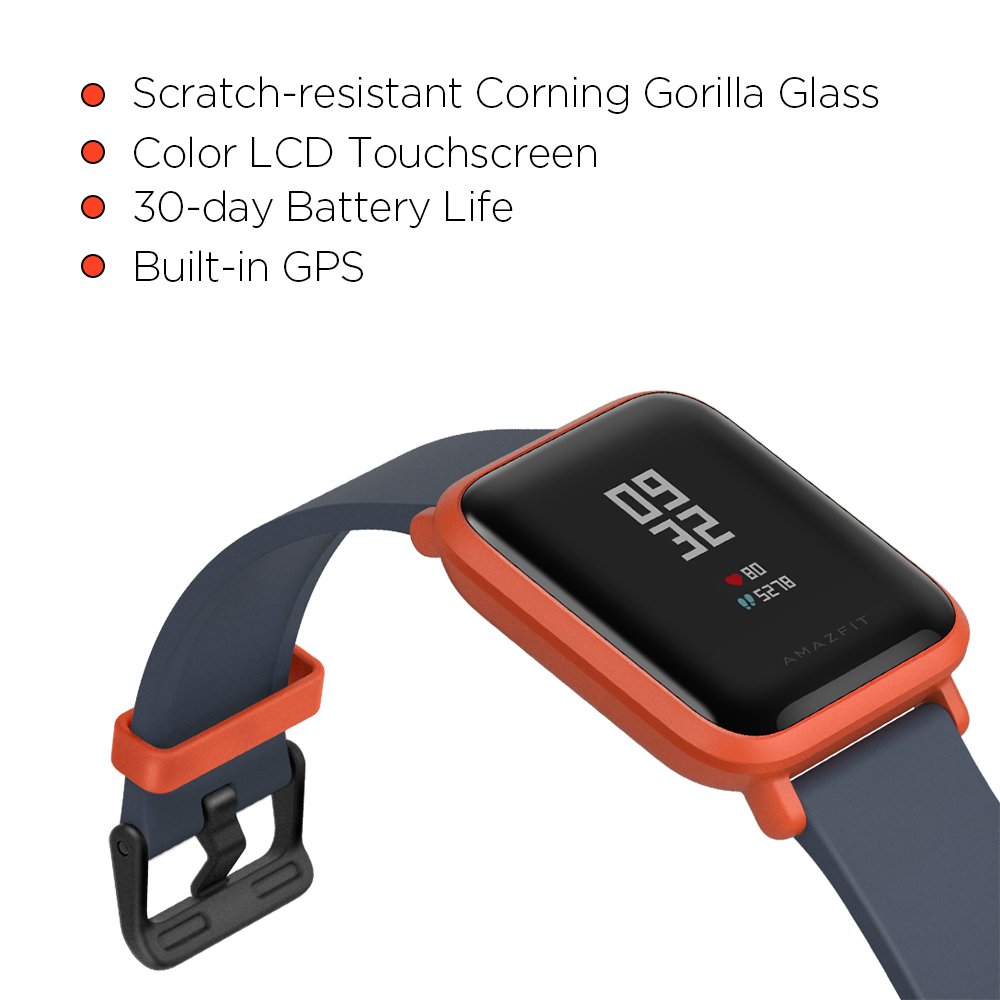 The watch is definitely able to receive notifications of your emails, text messages, and incoming phone calls.  The only downside is that you cannot answer phone calls directly from your smartwatch.  You still need to pick up your smartphone to respond.

I know that this could may not seem as smart as the other watches on this list, but its battery life overpowers the competition and makes it stand out from the rest.

For a single charge of 2.5 hours, your smartwatch can last up to 30 days.

Weighing only 32 grams, the Bip is ultra lightweight.

I personally like its customizable design which lets you swap case covers.  There are 10 various colors of silicone straps to choose from and you can pick the one you please. 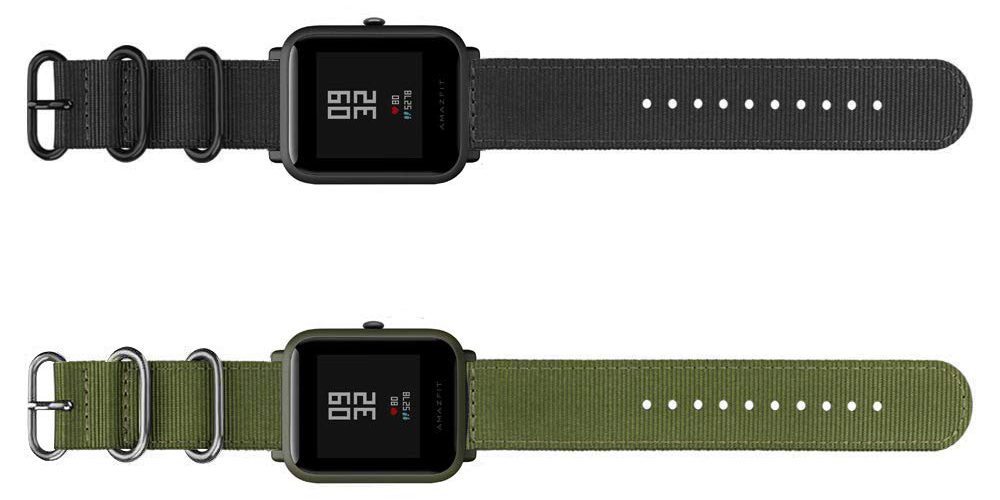 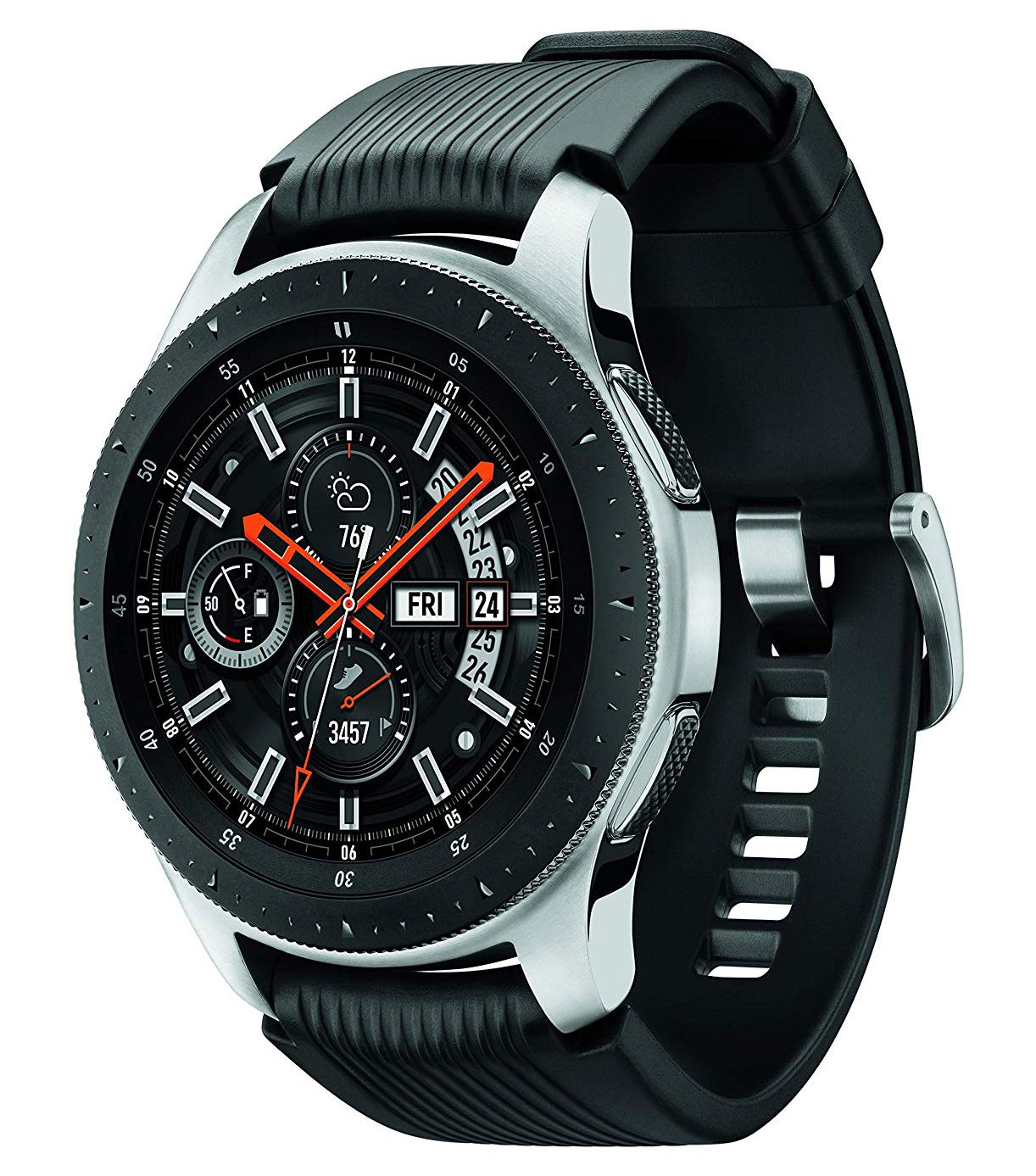 What makes this smartwatch smart? There are many, but I particularly like the rotating bezel on the Galaxy Watch, which is undoubtedly its crown of beauty.  This is something that gives you a reason to fully appreciate the navigation of such a small device.

One of the biggest flaws of nearly every smartwatch is that most of us have difficulty in navigating the screen due to a limited and narrow screen size.  It never is usually that easy before to scroll on the display and select an application for users with larger fingers.

Thanks to its Tizen OS – an operating system that makes it a worthwhile platform for Samsung smartwatches – the watch delivers a new atmosphere of an environment and a different look of user interface compared to Google’s Wear OS.

Another aspect I like is the customization of the watch faces.

This is indeed one of the most strong points of a smartwatch  – the ability to change the looks of its face at any time you want.

Of course it’s a matter of personal taste of what face design you like based on your mood, styling, and fashion. It is undeniable that there are thousands of watch faces you can adopt.  Most are developed by third-party developers while some are custom-made by default.

However, I think that some of the watch faces look quite ridiculous.  Just select the high-quality ones to refine the looks of your watch.

Thanks to its AMOLED display (360 x 360 ppi), it is striking to see the watch face in action such as G-Watch which looks real and vibrant as if you are wearing a mechanical watch.

All you need is to install the Galaxy Wearable application in your smartphone through Google Play to access these features.

More importantly, the 4 days run time of its battery in a single charge of 46mm model and 3 days for 42mm is somewhat notable. 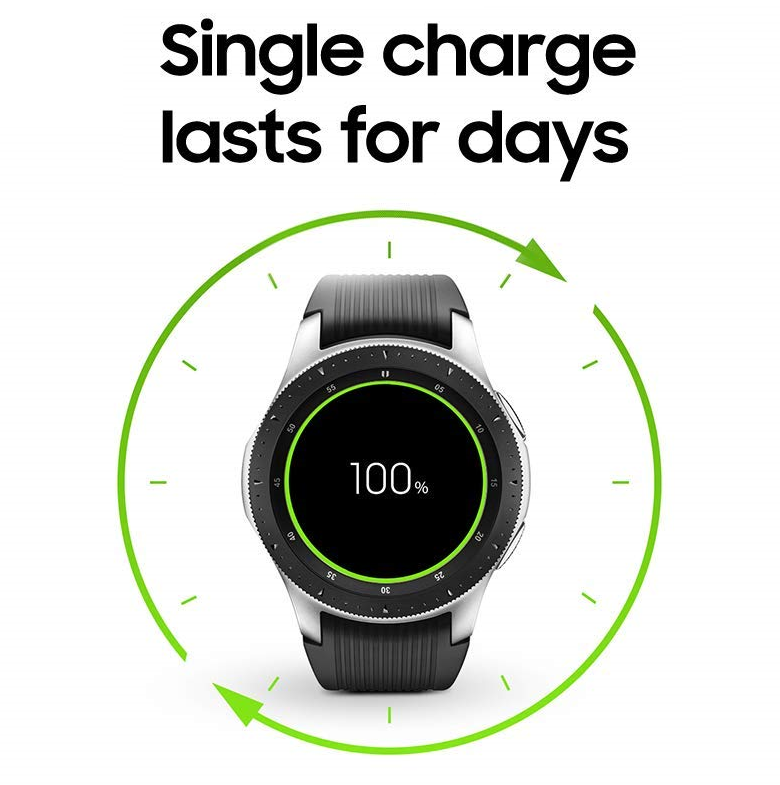 Though it is not a big leap for Samsung to improve battery life, it is a relief for a lot of smartwatch users to avoid the inconvenience of charging your watch every day.

It certainly comes in handy for people with varying wrist sizes.

Rosegold is a perfect fashion watch for women.

With all its features and packages, it is no wonder that Samsung Galaxy Watch is easy to love and offers the best Android smartwatch experience so far.

As you see, it is very crucial to consider battery life before buying. 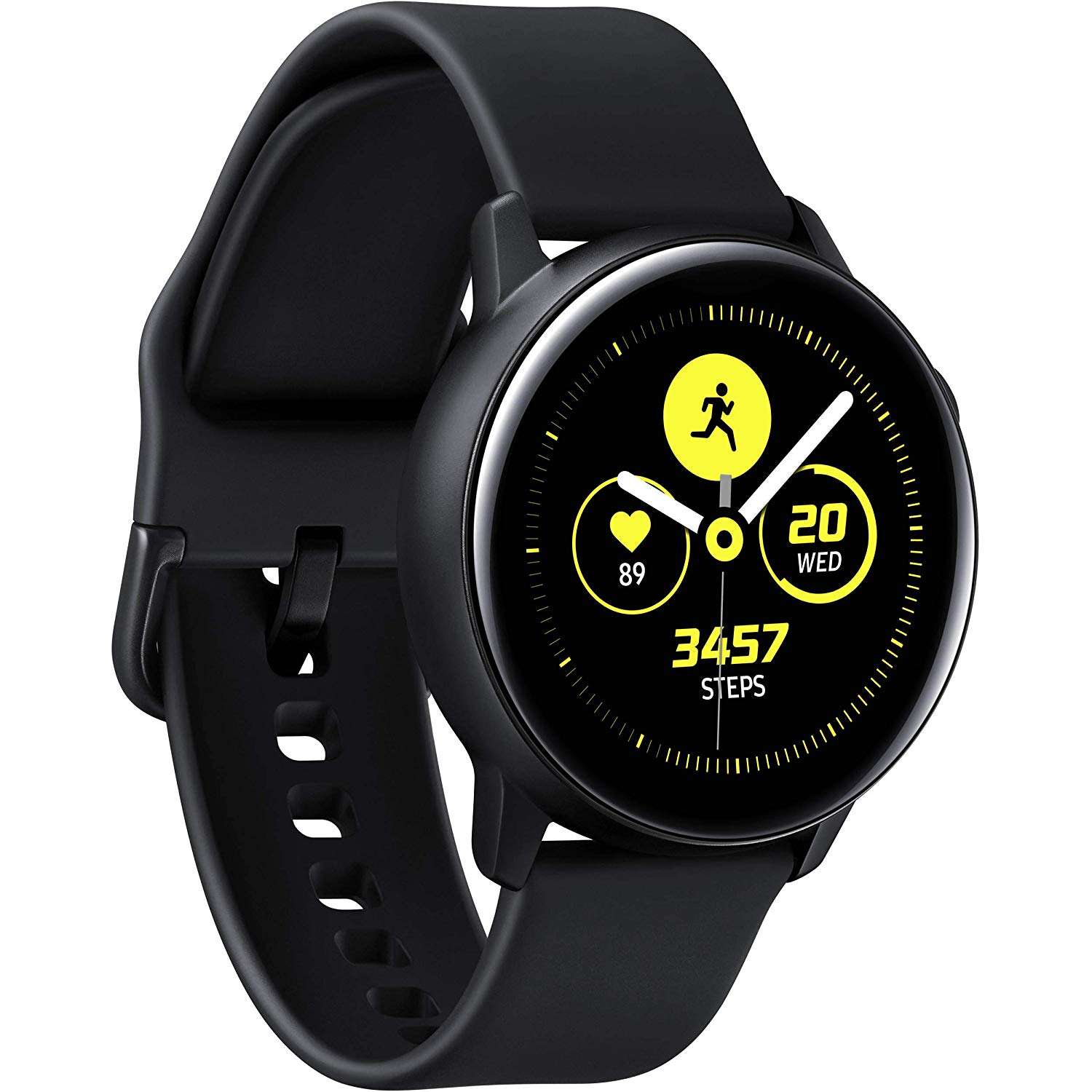 This is another entry from Samsung’s smartwatch lineups.

Obviously, the reason why Samsung created an alternative for Galaxy Watch is because that not everyone might be comfortable with the size and weight of 63 grams (for 46mm) load or even the lesser 49 grams (for 42mm). 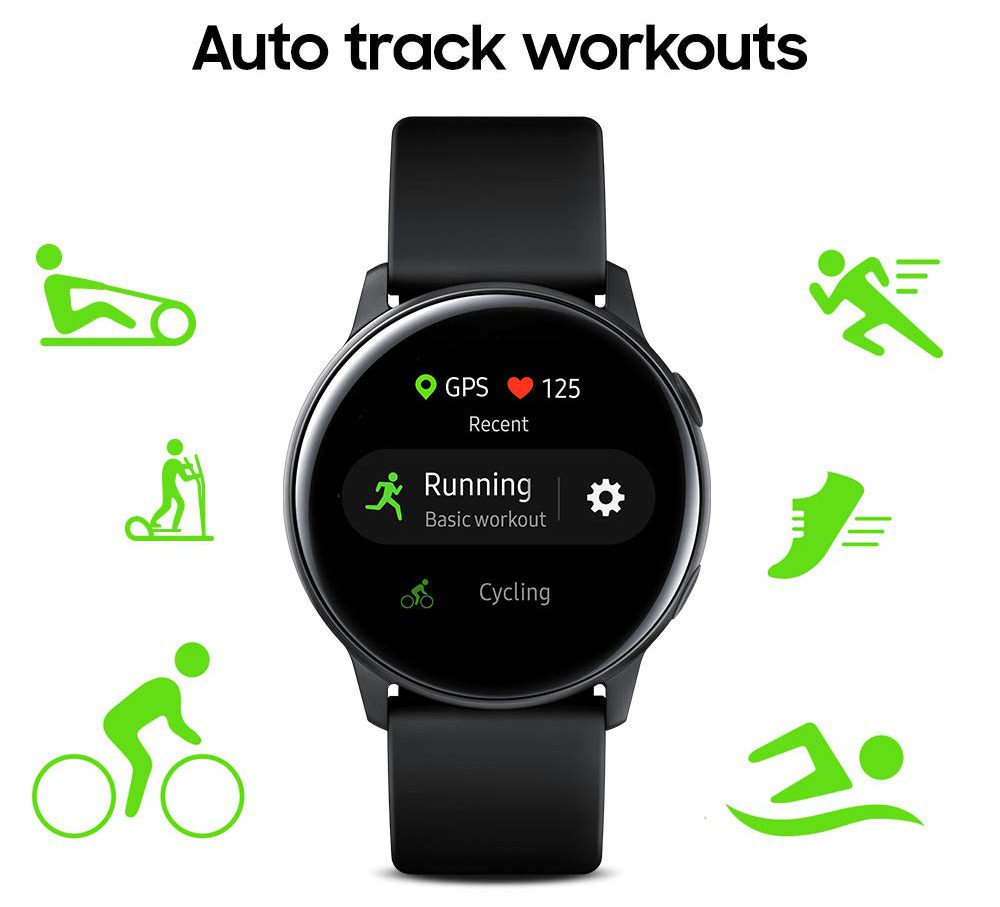 It’s pretty obvious why the word “active” is added from its predecessor Galaxy Watch, which signifies that this watch is designed for anyone who has an active fitness and a sporty lifestyle.

This watch is dedicated and useful if you want to live with your daily routine of workout activity without that hefty burden in your wrist. 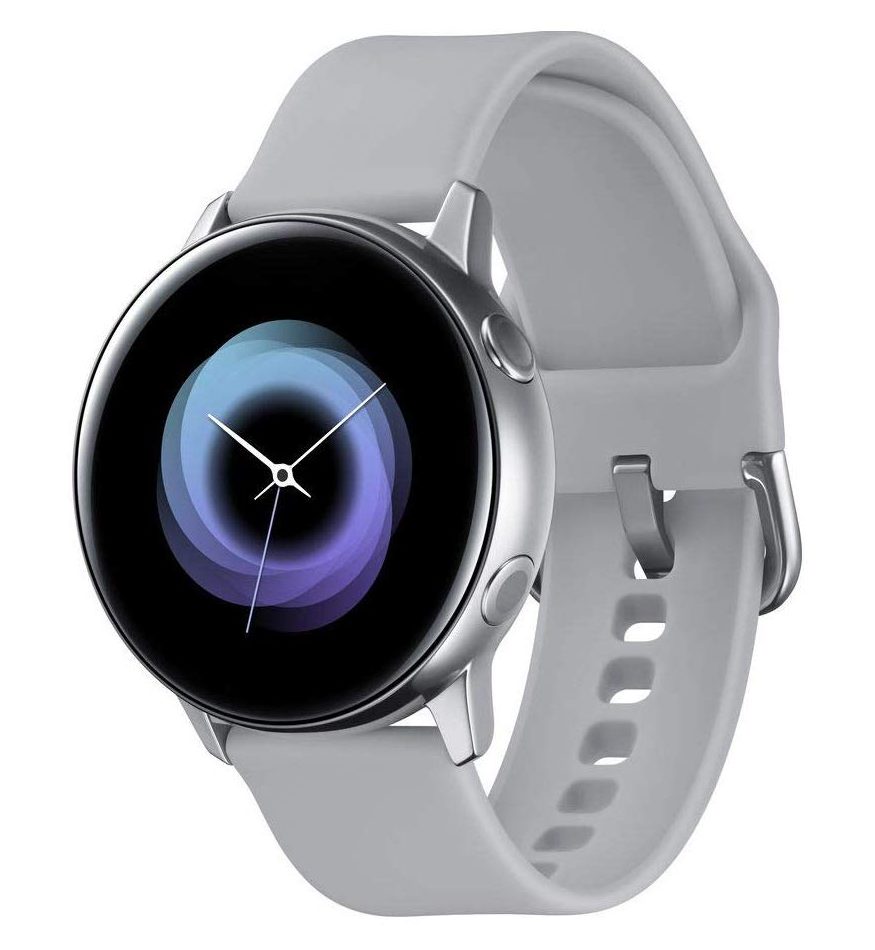 In order to shrink its size and weight, it sacrifices the very signature of the Galaxy Watch – the rotating bezel.

Despite this, it still shares the same functions and power with Tizen OS 4.0 and 1.15GHz dual-core Exynos 9110 chipset both with 4-gigabyte internal storage.

Without the rotating bezel function however, it can make you feel a little bit restricted to freely navigate with its 1.1-inch screen size.

On the plus side, the Galaxy Watch Active is distinctly sleek and lightweight.  It has a dimension of 40mm and only weighs 25 grams, almost half of the weight of the 42mm model Galaxy Watch.

For someone like me who has a smaller wrist, the size of Galaxy Watch Active is ideal and fits just right.

Keep in mind though that there is no other size available except that of 40mm. 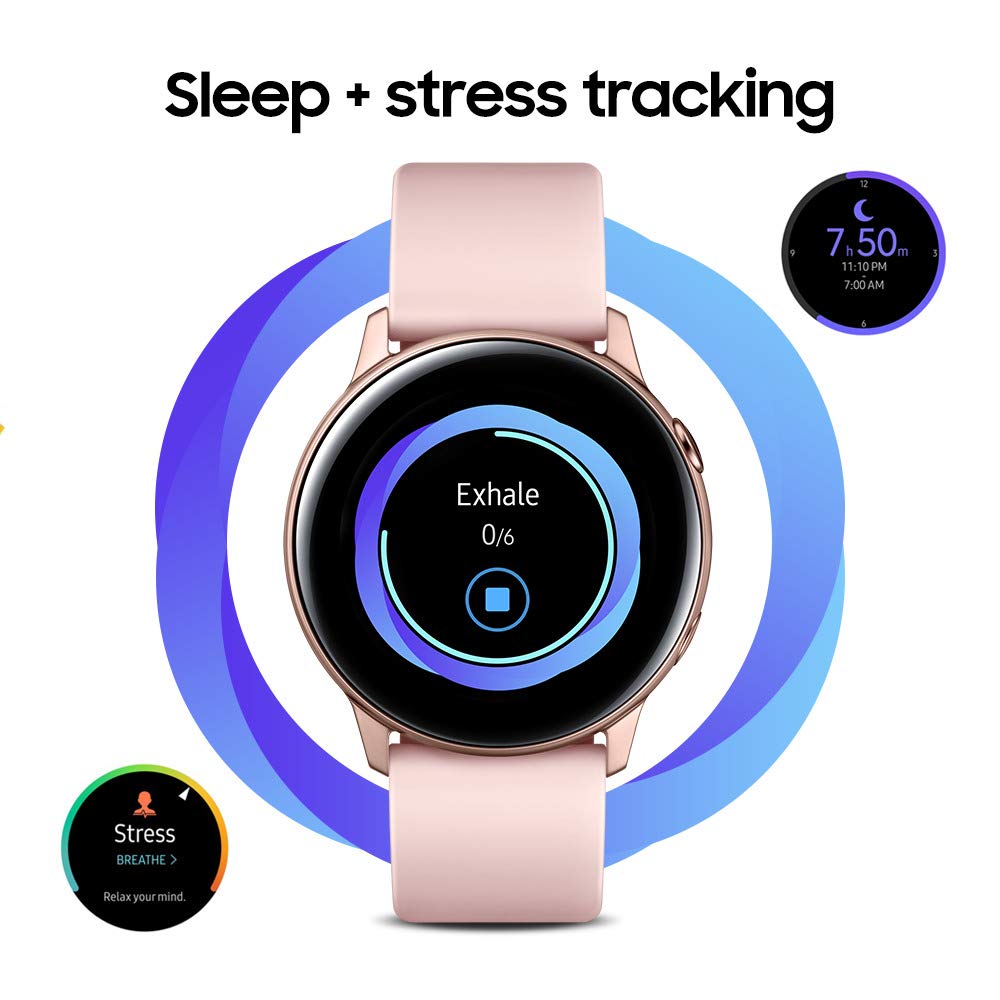 I think Samsung tied down on the size of the Galaxy Watch Active to maintain its feathery weight, which is convenient.

What I am only against is the battery life which is only 230mAh.

It could take you only two days to fully consume the juice of the battery.  It is quite short compared to the 4-day life of Galaxy Watch 46mm model. 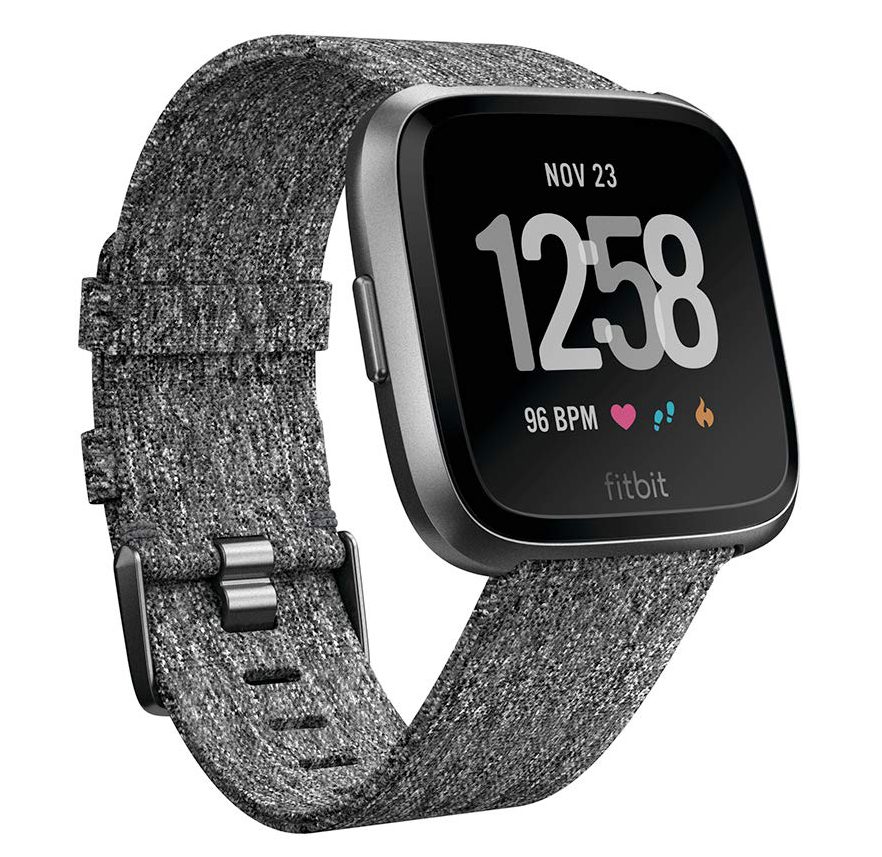 It is logical for Fitbit to redesign its first two iconic smartwatches – the Blaze and the Ionic, which were released in 2016 and 2017, respectively.  Sad to say, both do not have that aura to dominate the smartwatch competition today.

So, what makes the Fitbit Versa better?

Redefining its shape and form is the most notable part of this new model.  At least now it looks a bit more modern and smarter than its predecessor. 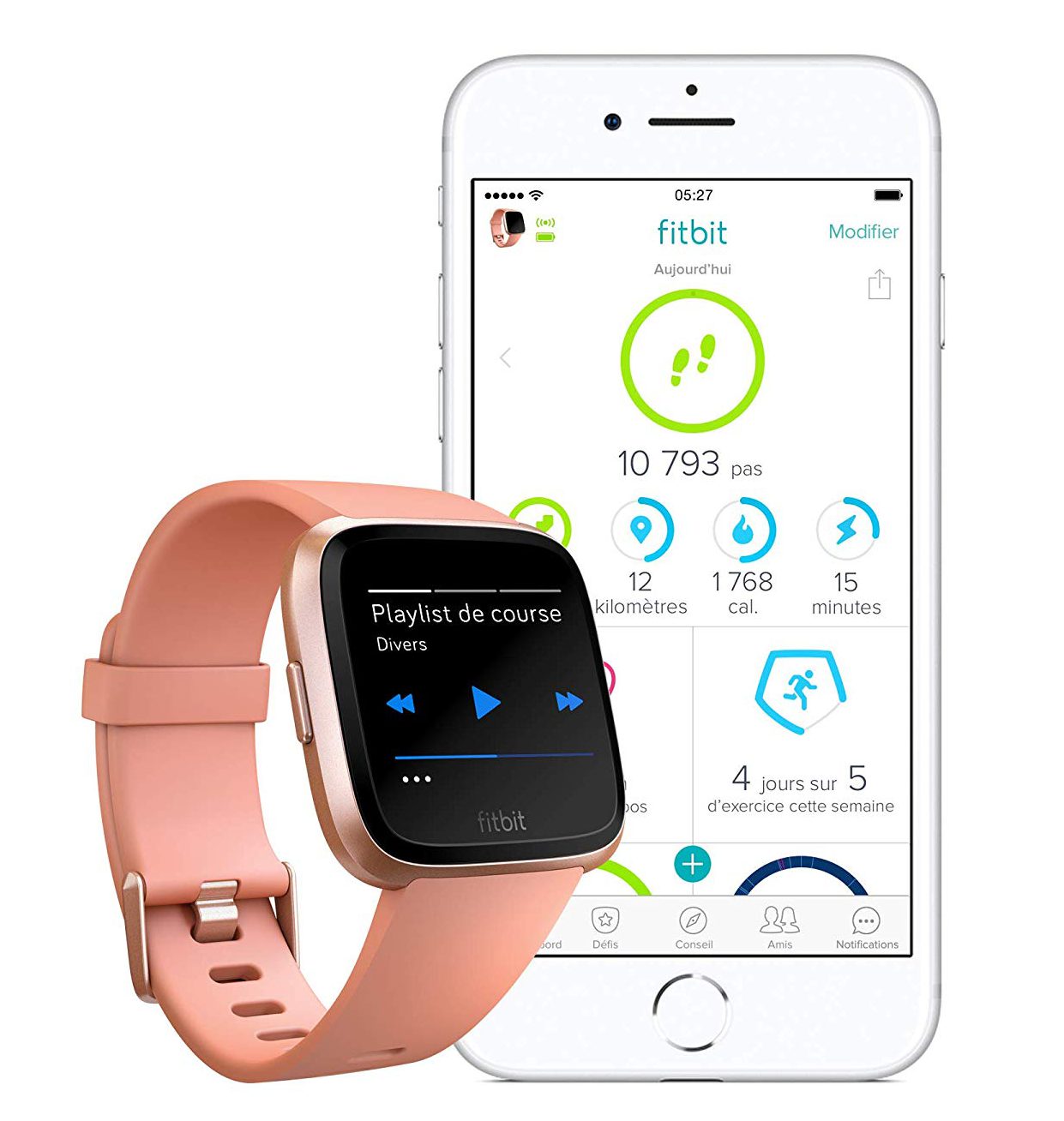 The broad aluminum chassis is now out of the box and made a clean-cut by featuring a square-shape with rounded edges in the corners.

Fitbit had to reorganize the hardware components and sacrificed the GPS before they finally come up with its new form, sadly.

So don’t be surprised if the Fitbit smartwatch does not come with built-in GPS.

In some way, you can use the GPS of your smartphone if you really need to track your sports activity with your smartwatch.

So, what’s with the new Apple-esque look?  Obviously, it is somewhat similar on the outside but Fitbit Versa appears wider in breadth.  Still, the Apple Watch manages to stay on top as the largest display smartwatch in the field. 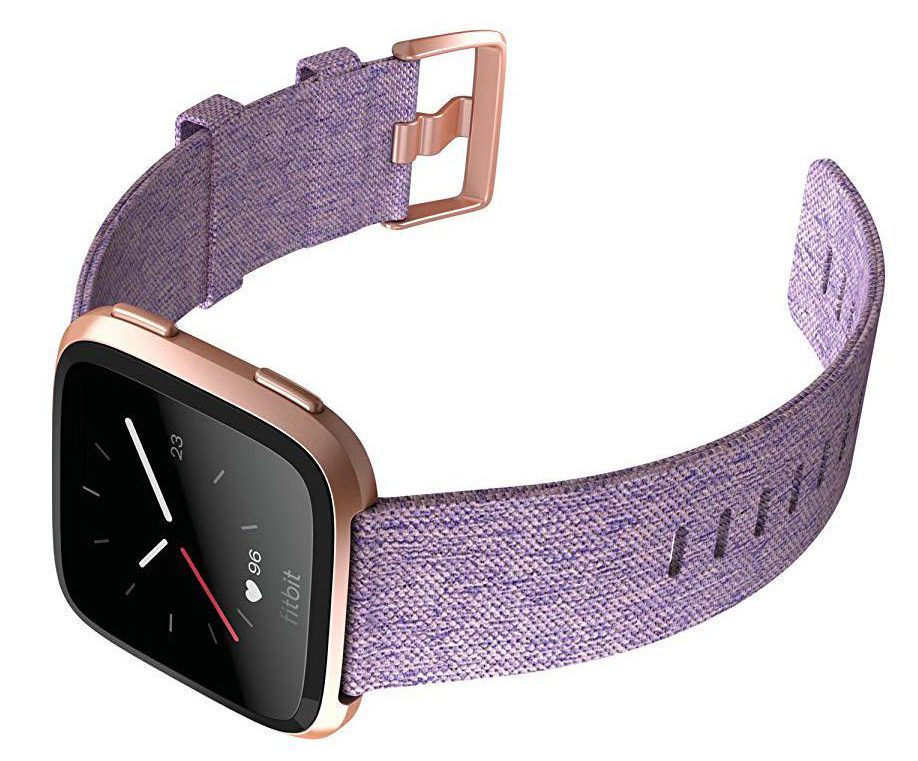 We still look forward in the future how Fitbit could improve the display quality  to lock horns against its competitors.

On the plus side, the Fitbit Versa draws its strength on the price per se.  A variation of the Special Edition of Fitbit Versa is almost half of the original price of Apple Watch Series 4.

If the value does matter to you, Fitbit doesn’t hold back and offers the Versa Smart Watch and Lite Edition for a smaller cost. 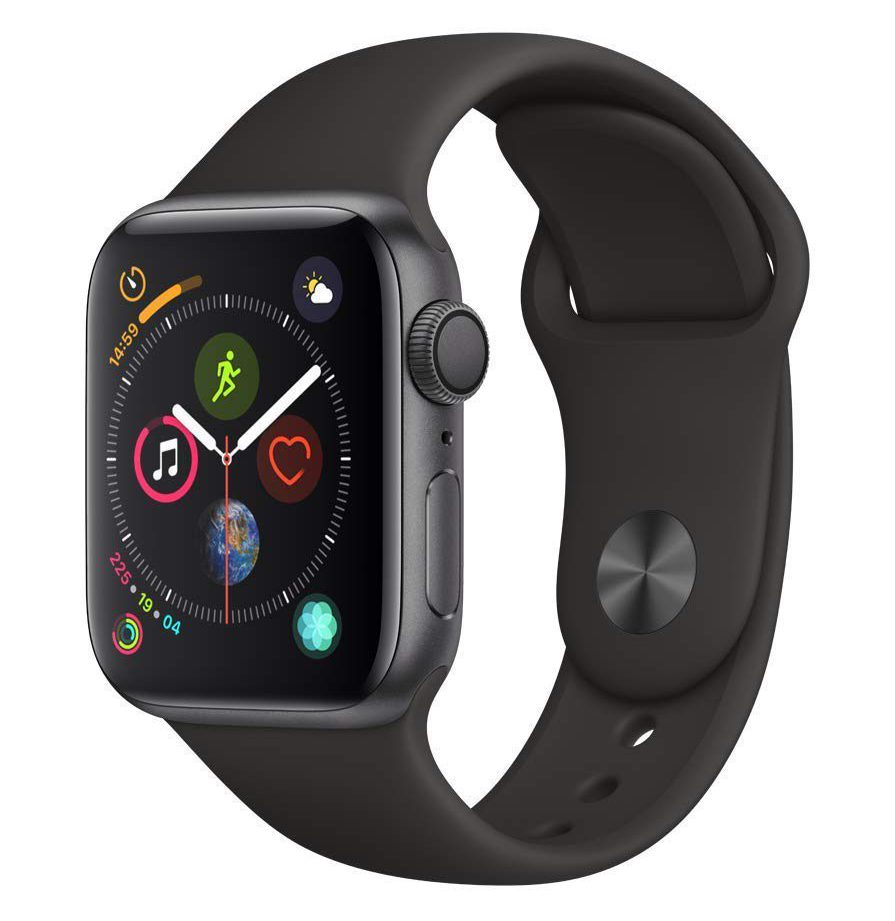 It’s usually no argument that the Apple Watch is the standard bearer of cutting edge smartwatch tech.

It is a fact that Apple is not the first one to run the race in wearables technology. Around the 1970s, the first digital watch – the Pulsar, was released.  The foundation for modern wearables began from the dot matrix display with very limited memory of 112 digits only.

As it shows, the development of wearable devices is quite slow.  No one really foresaw how a digital watch couldevolve into a smartwatch. 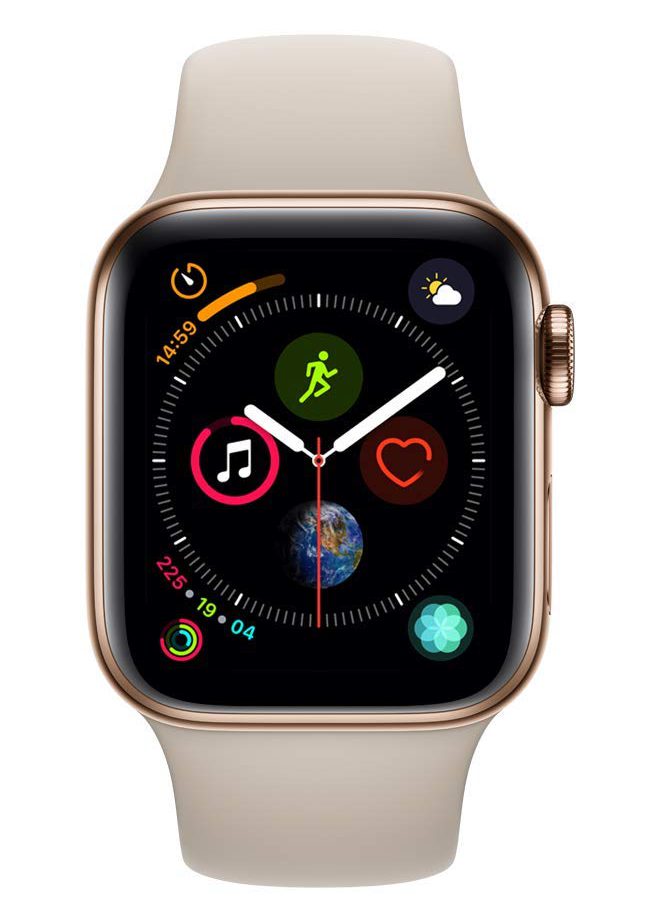 The beginning of the modern revolution of a smartwatch took off in the 1990s onward with the introduction of early data transfer modes which were made possible between your watch and a personal computer.

In 2015, Apple released its first-ever smartwatch.

Surprisingly, it became the best-selling wearable device with 4.2 million sold for that same year.

Everybody is applauding that Apple was able to make its watch smarter.  Its gleaming look and stylish customizable bands become a trending signature of wearable technology.

Recently, Apple has become serious with its updates of its watchOS.  Apps are growing in number and never-before-seen features in a smartwatch are now on the rise.

In the long run however,  the multitude of task applications take their toll and its battery life suffers.

You can only use the watch for only 18 hours a day, meaning that you need to charge it from time to time.  The maximum charging time will take you at least 2 hours. 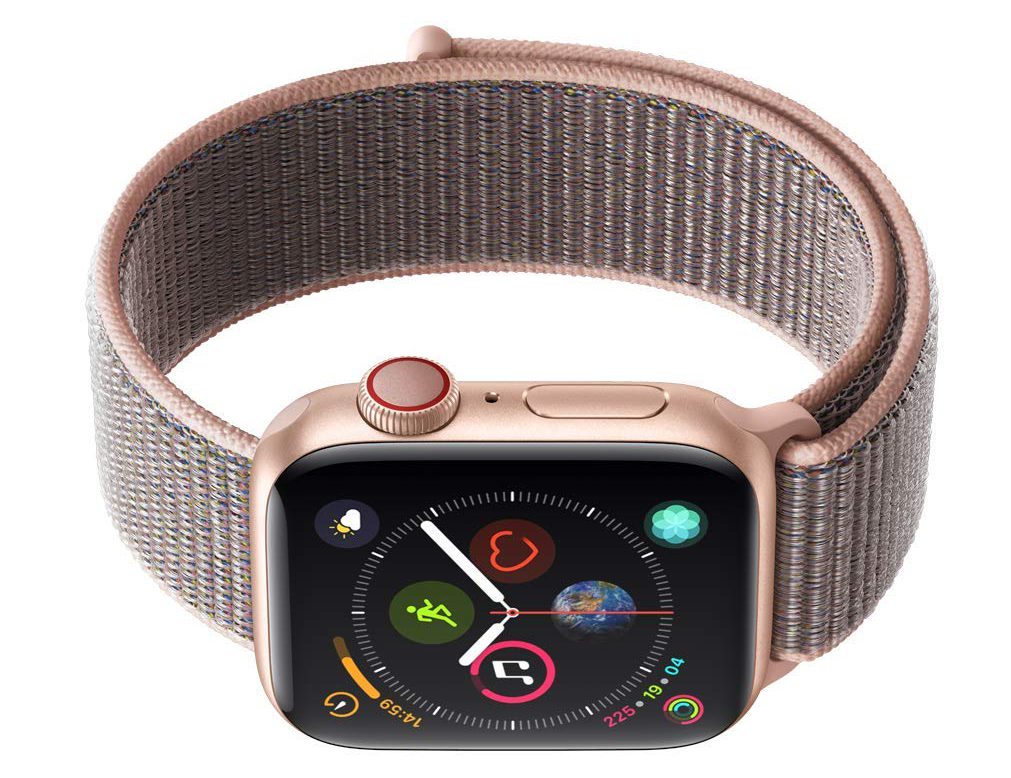 The Apple Watch Series 4 has raised the bar for modern wearables.

with the exception of the sub-par the battery life, the Apple Watch is almost close to becoming a smartwatch in reality.

Smartwatches are now becoming a part of fashion and style especially with younger generations.

When considering which one to get, always make sure to consider the size and thickness to conform the size of your wrist.  It can be quite clumsy to wear a smartwatch that nears satellite-dish proportions.  No one wants to looks silly, after all.

Since most of the top-rated smartwatches come with a price, it is wise to invest in a brand that is reliable and trustworthy.  Don’t risk losing your money to smartwatches with a lower value-for-price performance.

Stay on the high-end and top-rated smartwatches, and you’ll be guaranteed great performance.