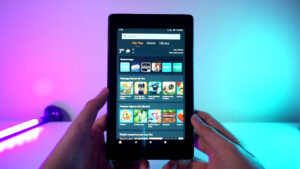 Today we have the Amazon Fire 7 Tablet which is one of Amazon’s most affordable devices. It’s part of their Fire series of tablet devices which includes the Fire 8 HD, and Fire 10 HD. Its low price definitely makes it an attractive purchase, especially with all the holiday deals going around right now. But is it worth your cash? Let’s take a look.

If you’ll remember a few years back, the tablet market was flooded by a ton of compact tablets like the Nexus 7, Samsung Galaxy Tablets, and iPad Mini to name a few. Fast forward to today and a majority of manufacturers have either moved on from tablets or have stuck to offering premium devices. With that said there are very few manufacturers willing to put out 7-inch Android tablets, and besides this one you do get the Lenovo Tab M7 as well as some other off-brand devices which honestly leave a lot to be desired when it comes to software and after-sales support. But in addition to brand name and availability, the Fire Tablet stands out because of its very affordable price point. So how does the Fire 7 Tablet perform in this day and age? Let’s take a look.

Let’s start off with the specs sheet for those unfamiliar with this tablet. The Fire 7 Tablet features a 7-inch IPS display with a pretty basic 1024x600p resolution. Powering the tablet is a Mediatek chipset, paired with 1GB of RAM and the choice of either 16 or 32GB of onboard storage. You get 2-megapixel cameras on both the front and back, and this whole set-up runs on a battery that, according to Amazon, can last up to 7 hours of mixed usage. There’s also a 3.5mm headphone jack and a microSD card slot which are nice additions since we don’t see much of these nowadays. 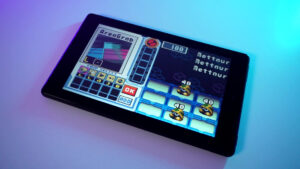 The design of the Fire Tablet is very minimalist, and if you prefer a subtle matte look to your devices then this should fit right in with the rest of your get-up. It comes in a number of other colors, and while it doesn’t exactly feel premium I like how the matte polycarbonate back feels. Compared to other compact tablets like the Lenovo Tab M7 and iPad Mini it does feature pretty large bezels, but then again the main point of this device is its price and functionality, rather than an attractive design.

As a media consumption device the Fire 7 Tablet manages to get by. While the display isn’t the sharpest and brightest out there, it still gets the job done if you want to read your ebooks, browse the web or watch content. All in all it’s a compact device which can easily fit in your backpack or luggage for long trips which require a bit of entertainment. 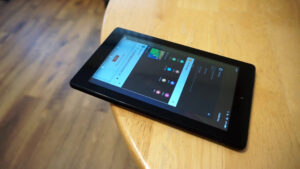 With this being an Amazon-branded device, it doesn’t exactly run on Android as a lot of people might be familiar with. Underneath the hood the tablet runs Android 7, but once you hit the home screen it’s obvious that Amazon has customized nearly every visual aspect of the UI to tie in with their ecosystem. Instead of the Playstore and other Google service apps, you get the Amazon appstore, Alex, Kindle, as well as a whole slew of other Amazon apps. One disadvantage is that the Amazon Appstore lacks some software that can only be found on Google’s own app store.

You can of course sideload some Google services but it does require certain methods which are unavailable natively on the device.

Performance-wise, the 1GB of RAM on the tablet is enough for most basic tasks – once again we have to remember that this is an entry-level device with a focus on media consumption and casual gaming. The processor onboard isn’t the fastest out there, scrolling through the UI and multitasking will be slower if you’re coming from more premium devices, and as far as gaming goes, you should stick to older titles and less graphically-intensive software. I’d like to think that this device works best if used primarily to read books, browse web content and stream music or visual media.

Battery life is so-and-so. In my experience the tablet can sit on standby for around half a week before needing to charge again, but you should keep your charger nearby if you plan to use this heavily. It can last for around 5-6 hours in my usage, but games do tend to take a chunk off the battery life. I do wish that we got USB-C charging on here, but Amazon had to cut back on certain features to keep the tablet in this price range. As for camera performance, it’s pretty much expected that budget tablets won’t do a very good job with capturing photos. You can maybe use the tablet for video conferencing and such, but I’d stick to my smartphone for taking photos.

In closing, the affordable price point means that the Fire 7 Tablet has some performance limitations. If you need a basic tablet for media consumption, entertainment and casual gaming, then this might be a great device for you. The solid construction, availability and pricing make this a great gift for young ones or a secondary entertainment device.

While it is affordable it does come with ads so you have to pay a bit of extra if you wanna get rid of the ads altogether. However, power-users and enthusiasts might wanna check out better-spec’d devices if they’re looking for a tablet that can match their needs.